Spotted in Venice: Tom Cruise is here and he is amazing!

From venice the filming of the new Mission Impossible: no stuntman needed, just an amazing set on the lagoon.

The last shots of the new chapter of “Mission Impossible” in Venice.

Everybody knows: for the action scenes of his movies, even the most dangerous, in particular the "Mission Impossible" saga, Tom Cruise doesn't want stunts. He jumps, he launches, he fights and he act like a real super man. This time, he is then the protagonist in Venice, grappling with a chase scene from the well-known saga, as he casually jumps from a taxi to a boat.

The set is in Rio di San Zan Degolà, behind Campo San Giacomo dell'Orio in the Santa Croce district, it is about 5 pm and the American actor, 58 years old, is following closely the directions of the director Christopher McQuarrie, who illustrates the scene. The actor has been in the lagoon city since last Monday and is staying (with great privacy) at the Hotel Gritti. But it's already time to shoot ... take! Cruise engages in some balance tests in the taxi, then takes the leap. The lucky ones, who were able to watch the filmed sequences in absolute preview, were certainly the residents with windows and balconies overlooking the river, to whom Tom addressed greetings and smiles hidden by the mask. 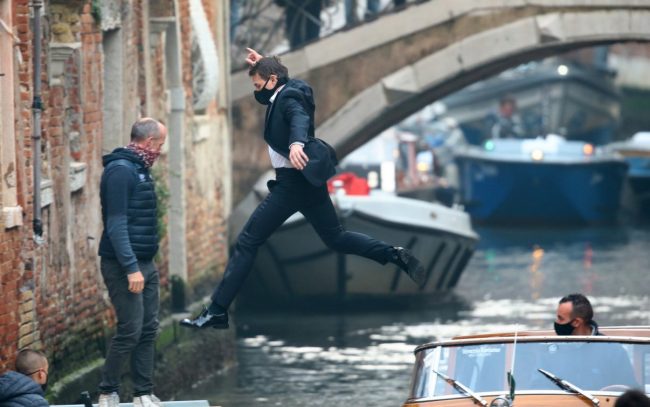 The American actor will remain in Venice at least until the beginning of November, when the scenes are planned for none other than Piazza San Marco and the Doge's Palace. Previously, shooting had taken place for about two weeks in Rome. The release date of the film is scheduled for November 19th, 2021.